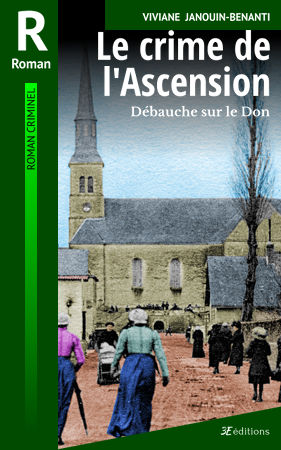 In the area of Nantes (France), a woman and her son were in love, a passionate, mad, carnal love... creating the scandal in the city. An incestuous love prohibited by the law.

In Issé village, the news goes quickly... Bernadette Cessé will die, then the young Lucas, and to finish Pierre Lemasson the night of the Ascension Day. Who commits these crimes? Odette Lur, the envious never married? Roman Lanec, the basket maker? The libertine Jean-Louis Urvoy, the rejected lover? Marie, his wife, so fragile however? Ruth and Zachary Fechner, the strange hatters? Mrs La Noue? Gonzague, her son, priest of Issé? Joséphine Toussaint? The butcher?

The criminals prevail in the small town.

An enthralling novel, a true story as usual, by Viviane Janouin-Benanti, who once again involves us in the depths of human soul.

You can read an excerpt of The Ascension Day crime on:

Paperback at € 10 available from: Amazon

Paperback at € 10 available from: Amazon