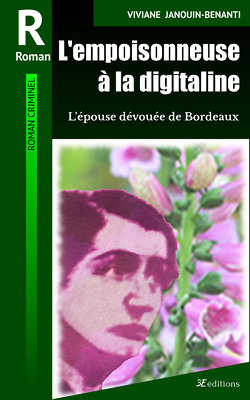 The poisoner with digitalin

A true story in Gironde (France)

In Bordeaux (France), the diabolic Élisabeth Ducourneau poisoned as she pleases… Only an anonymous letter turn the police force towards her and put a term to her criminal career. The poison she used, digitalin, is easy to get it taken and leaves few traces. Almost perfect crimes… for strange mobiles. In this attractive novel, one discovers a devoted wife, an exemplary mother who could have killed for a long time if justice had not put her in prison. She will be guillotined…

However, this true story is also about the despair of a father returned broken of the Great War. It is still, with the approach of the second world war, the rise of fascisms, the arrival of the refugees who flee them; in particular Spaniards running away Franco. And it’s obviously also the antisemite acts that are on the increase in France, preparing the way for Vichy government.

A captivating novel in which Viviane Janouin-Benanti wins over the words and the feelings to inspire us with an astounding elsewhere.

You can read an excerpt of The poisoner with digitalin on:

Paperback at € 9 available from: Amazon

Paperback at € 9 available from: Amazon