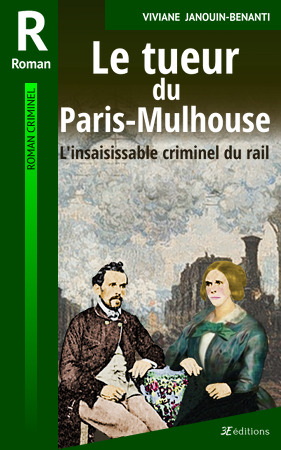 The killer of the Paris-Mulhouse train

A daring criminal, Charles Jud terrorized passengers on the Paris-Mulhouse railway line. A Russian professor of medicine and above all a high-ranking magistrate, Judge Poinsot, are among his victims..

He mastered the art of disguise, he could appear as an attractive woman or as an athletic man. Uncatchable, he drove to despair the finest French detectives that he mocked with his foolhardy and provocative letters and apparitions..

He became a railway legend and inspired novelists such as Émile Zola for La Bête humaine and the character of Fantomas. He also fascinated journalists who did not hesitate, over a long period of time, to attribute to him all the unsolved rail crimes. The fear that it inspired to the travelers forced the authorities to set up an alarm signal in all the wagons…

A fast running life, some attractive characters, the novelist Viviane Janouin-Benanti had, once again, all the ingredients to immerse you in a compelling narrative.

You will throwing yourself headlong into this incredible true story.

You can read an excerpt of The killer of the Paris-Mulhouse train on:

Paperback at € 8 available from: Amazon

Paperback at € 8 available from: Amazon