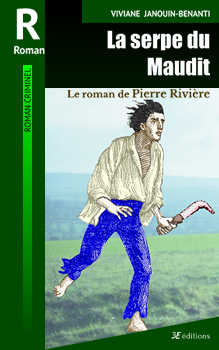 the novel of Pierre Rivière's life

Why Pierre Rivière, young farmer of the area of Caen, did kill his mother, his sister and his little brother?

It is all the story of his life which is told in this book. Here, Viviane Janouin-Benanti carries us away in the depths of a heart which aspired to the infinite love, and which only got the contempt. As pages go by, the mind and the heart of Pierre light up with intense brightness.

Obsessions, murderous impulses, surge of mysticism, descent into hell of the madness, are described there with an incredible meticulousness.

The small farmer, hungry of justice, which wanted to be a righter of wrongs, lives again in front of us.

The story of Pierre is in keeping with this 19th century when republican and monarchists fight for the power, and where the secret societies multiply: Knights of the faith, society of the regenerated Francs, Bandouliers... The most important among them, Charbonnerie (French Carbonari), attracted, with its mysterious rites, more and more of followers ready to give their life to reverse the old regime.

After Held captive 25 years and Henri Pranzini, the splendid Darling, the author again involves us in an enthralling universe.

The young person who dream to be God, "hero" of the Devil’s billhook, and who has a phenomenal memory, wrote a manuscript brilliant of intelligence which marked the judiciary record forever. Once he has finished the book, the reader will never forget Pierre, the wounded schizophrenic.

Impassioned by the true stories, novelist of talent but also rigorous investigator, Viviane Janouin-Benanti gives life again to singular fates which distinguished themselves in the most terrible actions of humanity, the murders.

You can read an excerpt of The Devil's billhook on:

Paperback at € 11 available from: Amazon

Paperback at € 11 available from: Amazon